The Creative Practice of Jeannette Petrik 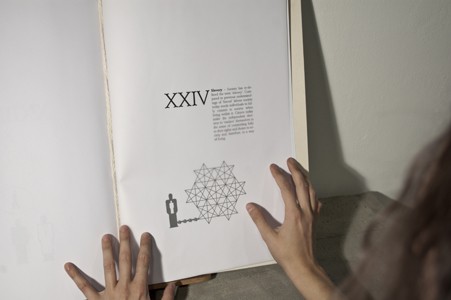 The project is set in the 'future-future', some time around 2100. Through a speculative scenario Silvia Dini Modigliani, Martina Muzi and Jeannette Petrik, imagine how society and the material world could have changed as society wouldn't be able to rely on fossil fuels any longer. The proposed scenario revolves around the assumption that capturing the energy of human movement will have become the standard method of producing energy in society. The project entails a written document that describes the scenario in detail in form of a 'constitution', a social contract. Each paragraph is accompanied by an iconographic illustration. The document looks at the production of energy, its relation to members of society and to the production of objects and facilities.

I Energy from Movement as Basis of Society

Society has run out of fossil fuels that it previously relied on for the production of energy, therefore, individuals are forced to contribute directly to the production of energy rather than barely to its consumption. As human beings naturally produce kinetic energy through movement, technology to capture this energy is used as a standard method of energy production and has become the basis of technological development and life within society. Therefore, every human has at birth been equipped with an energy-capturing device that makes the energy produced through motion by every individual in society accessible. 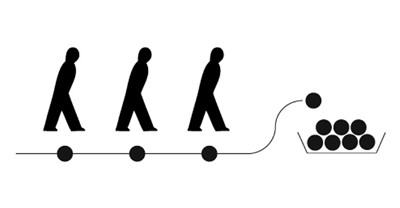 As energy is produced in most situations of life it has become the centre of the economic system and transactions within it. Instead of being based on a symbolic, imaginary value the monetary system has the self-production of energy at its core. What has been known as ‘money’ has been replaced with energy units, measured as hours of effort, produced independently by individuals in society. Motion has, therefore, become a central element in human life, rather than thinking of motion as transportation from one point of static sojourn to another, movement itself has become the goal of daily life in order to acquire wealth." 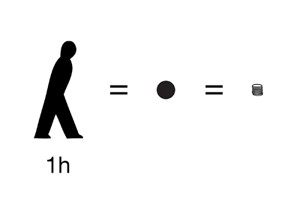 This economy relies on an intricate infrastructure of energy transportation lines with access points in private and public spaces which enables members of society to feed produced energy (h) into a grid or draw energy (h) from it. Each individual's contribution is recognized and registered at access points and will determine the amount of energy that can be withdrawn from the system. Individuals will temporarily stored energy in containers, batteries sized according to capacity measured in working hours. Those containers have replaced previously used symbolic currency of coins and bills and will only be valid if charged with energy (h).

Each member of society is physically modified in order to be able to directly contribute to the production of energy. Individuals carry an energy harvesting device within their body which is implanted at birth and enables them to release produced energy through an artificial bodily outlet which energy containers can be plugged into. This physical enegineering of members of society enables the innovative production of energy which society is based on.

Objects are produced using energy generated by the members of society. The material chosen for objects is the calculated as a combination of expected durability and energy consumption. Following this calculation expressed in the Energy Table of Materials the industry produces objects by measure of efficiency. The objects are categorized by price (h) related to the necessary hours to be made, energy needed to produce materials, energy for machines and human hours to produce the object. The objects are produced according to the spending of time, the shorter time needed increases the value of an object.

VI The Value of Objects

The value of an object is strongly related with the amount of energy (h) needed for its production and is, therefore, strongly connected to the human movement. Compared to the past, the value of objects has changed. It is not related to individual choice but follows the energy grid, therefore, it changes the relation between humans and objects. Objects represent human effort, this is why they are considered as storage of energy. As the human effort is at the core of the production of objects, human needs have changed in comparison to the past. An individual that makes an effort to purchase an expensive (h) object, made of an energy-inefficient material, while the same object could be produced in a more energy-efficient way (material and production method) is considered foolish.

VII The Price of Objects

The price of the objects is counted in hours needed for their production. The final number of hours needed to produce each object consists of the hours needed to produce the material and the human/machine labor to make an object. So, the price of things is strongly related to the material availability at a place of production (transportation cost). Local material is, therefore, always a first choice over the import of materials. The price (h) is a parameter to compare with the human effort necessary for production and, therefore, purchase of an object.

Social class is not characterized by different quality of objects but depends on the quantity of material used and hours needed, therefore, the quantity of objects. The advantage of sharing objects and facilities, and, therefore splitting the effort needed for their production between a group permits to consider a social group as an individual element in society.

IX Ownership in Relation with Objects and Energy

Buying material for the price of energy (h), a member of the society takes a place in the social grid. An individual has the possibility to use the self-produced energy to buy items but she can unify and share her energy with others. So, an individual has the choice to be part of a group that shares property and the choice to have her place in the grid or social classes as individual. In the social system a group has more possibility to be considered 'rich', as a group generally has option to own a large amount of facilities but has to make collective choices and act as a group.

X Role of the Industry